Join the Heber Valley Choir and Orchestra on Tuesday, March 13 for a free concert featuring stirring music from Pirates of the Caribbean, Pirates of Penzance, and the William Tell Overture at Rocky Mountain Middle School.
The musicians of HVCO will share a stage with the Rocky Mountain Middle School band and orchestra as the two groups celebrate “Music in Our Schools” month. The Music in Our Schools program was created by the National Association for Music Education and is designed to integrate education, practice, and performance of music into local schools.
According to the NAfME, this initiative “is an opportunity for music teachers to bring their music programs to the attention of the school and the community, and to display the benefits that school music brings to students of all ages.”
For the past two years the HVCO has been participating in this program to help encourage young people to start and continue to play music, as well as show the community the valuable role music has in our schools and community.
Heather Thaxton, director of the HVCO, said many of the orchestra and choir members started playing and singing in elementary and junior high programs. Though most have gone on to have other careers, music has always been apart of their lives, and events like these helps foster a new generation of musicians.
“It’s very important that these students see how music, singing or playing, can be something they take with them for a lifetime,” said Thaxton.
The HVCO and RMMS Band and Orchestras will perform next Tuesday, March 13 at 6 pm at the Rocky Mountain Middle School auditorium. The concert is free to attend, and all are invited and encourage to come celebrate Music In Our Schools Month.
You can also catch an encore performance on Monday, March 19 at the Wasatch County Senior Citizen Center at 6 pm. For more information about upcoming concerts or joining the choir and orchestra visit hvchoirandorchestra.weebly.com. 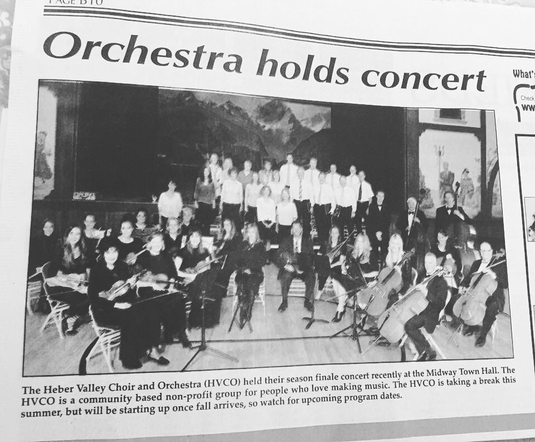